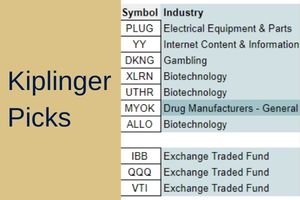 This is a post from my now-defunct paid newsletter. It was published on November 20, 2021. In it, I reviewed the performance of stocks that Kiplinger recommended to “buy now.” I also listed some other potential opportunities that are similar to their best-performing stock picks.

7 stocks are recommended in this article. About 15 months have passed since it was written and one stock is no longer traded:

There was a bit of diversity in these stock picks. However, the author obviously had a lot of faith in the biotechnology industry. While MYOK is listed under its parent company’s industry now, it was also a biotech stock when the Kiplinger article was published.

The VTI ETF was, as usual, used as a benchmark for the comparison of results. It made sense to include a biotech ETF, so IBB was also added. Finally, I felt that a big theme in the Kiplinger article was growth, so the QQQ ETF was added too.

The overall portfolio CAGR was very solid at 60%+. The performance of the individual stocks was a very mixed bag, though. Some real high-fliers and some real dogs.

Since most of the stocks are in the biotechnology industry, most of those recommended do not pay a dividend. In fact, only 3 of the 723 stocks in the biotech industry (according to Finviz) pay one. It’s just not typical.

The IBB ETF must include some of those stocks because it does pay a paltry (.3%) dividend.

As far as stocks go, the only one to pay a dividend is YY. Which is good, I suppose. But, it didn’t do much to help returns. YY was, by far, the biggest loser of the bunch. YY’s poor performance was credited to:

The obvious high-performer was MYOK. The acquisition by BMY at $225 per share (three months after recommendation) resulted in an epic 2,392.9% CAGR! This awesome performance is due, of course, primarily to the acquisition price. BMY’s main driver for paying such a premium was:

PLUG was another solid performer. Its healthy return can be attributed to:

Finally, I should address ALLO – the worst-performing stock of the bunch. ALLO’s detrimental performance is attributed to:

As usual, days above the start price correlated strongly with CAGR.

On the negative side, ALLO stands out. Had you followed this recommendation, you would have enjoyed almost zero days “in the black.” ALLO also had the worst single-day decline of all the recommendations with a nasty 46.1% decline in value on 10/8/21.

For as bad as the volatility was for ALLO, it was almost as positive for DKNG. Following Kiplinger’s recommendation here wouldn’t have caused too much stress with 100% of its days closing above the Start Price.

Also of note, QQQ, the growth ETF, had a bigger Min Day % Chg, than Max Day % Chg. This is not something usually seen in an investment that has a positive CAGR.

MYOK was recommended (and performed so favorably) in large part, because of the promise of drugs in its pipeline. So, when pulling together comparable stocks, I tried to choose biotechnology companies with promising candidates.

More information on those drugs can be found at these links:

Among these, MIST looks the best along the limited metrics provided. That depends, in large part, on how much you care about Rating. Anyhow, while LXRX has a relatively higher Price target, MIST shares a lot of that upside.

Others cited the fact that MIST has recently beat earnings estimates and is well-regarded by some hedge fund managers. Source.

Fortunately, Kiplinger offered plenty of metrics by which to find other opportunities similar to PLUG.

Among these, ENVX seems to compare favorably across all metrics. Though the EPS Surprise was lower than a couple of other stocks, it was still positive.

Others pointed to ENVX’s appeal as a U.S. battery manufacturer, their large Serviceable Available Market (SAM), and opportunities with military contracts. Source.

**To learn more about each section of this newsletter, please read the About Talking Head Stock Pick Review post.

All of this information in this newsletter is assumed to be correct and accurate as of the date of writing. No guarantee is made regarding accuracy, however. Readers are encouraged to double-check data and to do their own research.

Nothing in this newsletter should be constituted as investment advice. This newsletter is provided for informational purposes only.

Current opportunities represent stocks that have qualities that approximate those listed for the best-performing stocks in the article. When possible, they are also from the same industry/sector.

Only the attributes mentioned in the article are researched. No other qualification is provided as to the worthiness of investment. A multitude of factors influence a stock’s investment performance. Readers are encouraged to do their own due diligence if there is a current opportunity that they are interested in.

Current opportunities are merely offered as a starting point for further research. Absolutely no assurance is given regarding the performance of any stock or other investment.

I’ve worked in corporate finance for almost fifteen years. I have a bachelor’s in Finance and an MBA. I am also a Certified Management Accountant. At one time I had my securities license (Series 7) and Health and Life insurance licenses. What’s more important, is that I like to learn and always seek to truly understand the subject I am studying.

Invest Some Money was launched in 2018 in order to explore ideas in investing. To build on and dig deeper than existing resources.

Another one of Invest Some Money’s goals is to illustrate topics in-depth.