Skip to content
Home » Learn About Treasury Bills, Notes, & Bonds – How They Work 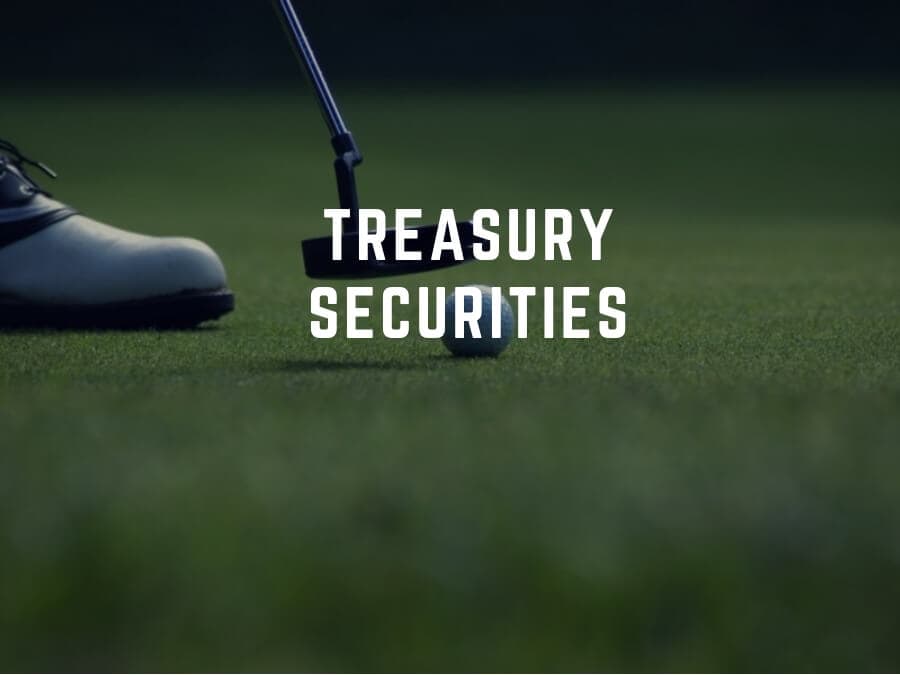 “What are examples of government securities?”

Previously, I wrote about three simplistic ways to invest some money. Those ideas included: invest in yourself, open a savings account, and pay down debt. Opening a savings account probably isn’t going to do much for you, but the other two are great ways to get a good return on investment.

This post will take the next step and cover a slightly more sophisticated way to invest. A way that many people might not think about. We all know about stocks, mutual funds, and retirement accounts. But, investing directly in different types of Treasury securities is a low-risk (and generally low-return) way to invest some money.

What are the 3 types of treasury securities?

US Treasury securities have a huge market with trillions of dollars in outstanding debt. This might be somewhat surprising, considering that most of the material written on the subject of investing seems to be about stocks, Forex, crypto, futures (commodities), and other more glamorous vehicles.

Bonds and fixed income government securities don’t get near the publicity. That’s probably due, in part, to only 10-15% of the outstanding Treasury securities being held by individuals. The rest are held by institutions and/or foreign investors.

There are a lot of options when it comes to investing in Treasury securities. They come in varying maturities from one month to thirty years. Plus, you only need $100 to get started.

Treasury securities are backed by the U.S. government and therefore are considered one of, if not the safest investments available. Maybe you have your concerns about the U.S. government’s ability to keep operating in the manner it does?

Fair enough. But, if the U.S. government fell somehow, whatever other investment you’re considering probably wouldn’t fare too well either. At least in the short to medium term.

In any event, Treasury securities don’t tend to pay very well. Somewhat better than savings accounts to be sure. But not great by any stretch of the imagination. They are more valued for their security than their returns.

Okay, so maybe you’ve heard of Treasury Bonds, Bills, and Notes, but you have no idea how they work? Here’s a quick rundown:

In return for lending them money, the U.S. government pays you interest.

There are three primary types of Treasury securities.

How do Treasury bills work?

Treasury bills (T-bills) are short-term investments; meaning that they mature within a year. If you buy a T-bill with the following:

Here is a historical chart for the rate paid on 3-month T-bills:

How do Treasury notes work?

Treasury notes (T-notes) are offered in terms of 2, 3, 5, 7, and 10 years. Unlike T-bills, T-notes pay semi-annual (every six months) interest. If you buy a T-note with the following:

Here is a historical chart for the rate paid on 5-year T-notes:

How do Treasury bonds work?

Treasury bonds (T-bonds) operate in the same fashion as T-notes. T-bonds are offered in terms of more than 10 years up to 30 years. Coupon rates will be higher for T-bonds due to their longer duration.

If you buy a T-bond with the following:

Here is a historical chart for the rate paid on 30-year T-bonds:

Other types of government securities

T-bonds, notes, and bills are the most popular government securities. But, alternatives do exist. These alternatives have slightly different features that may make them more appealing for inclusion in your investment portfolio.

TIPS stands for Treasury Inflation-Protected Securities. These pay interest semi-annually like T-notes and bonds. They are designed to offset the effects of inflation by adjusting the principal and interest amounts with changes to the Consumer Price Index (CPI).

Unfortunately, when demand for TIPS goes up, so does the price. This drives down the yield and can eliminate some of the inflationary protection you were seeking.

Savings bonds are unique in that they don’t make interest payments to the holder. They aren’t sold at a discount like T-bills either. Rather, savings bonds accrue interest, and that interest compounds (interest is earned on interest) until you cash the savings bond out.

Savings bonds have a maturity of 20 years but will continue to accrue interest for 10 years after that.

T-bills, notes, and bonds do not have to be held to maturity. There is a very active market for these government securities and they can be sold at any time. Keep in mind that their value can change if interest rates change.

For instance, assume you bought a T-note with a 3% coupon rate. A year later, new T-notes were being offered with a 4% coupon rate. If you wanted to sell your T-notes now, people simply aren’t going to pay as much for it.

If you are interested in purchasing Treasury securities, you can probably do so through your broker. Or, you can purchase these government securities directly from the Treasury at TreasuryDirect.

What are examples of government securities?

Treasury securities offer a safe, but (typically) low-yielding way to invest some money. Frankly, unless you have aspirations of being a professional bond trader for a Wall Street bank, the returns offered on Treasury securities probably don’t justify the amount of education needed to understand them thoroughly.

Do keep in mind, though, that if you decide to venture into bond investing, you might find more enticing opportunities in municipal (state or local government) bonds or corporate bonds.

Have you invested directly in Treasury securities? If so, what else should people know before they get started?