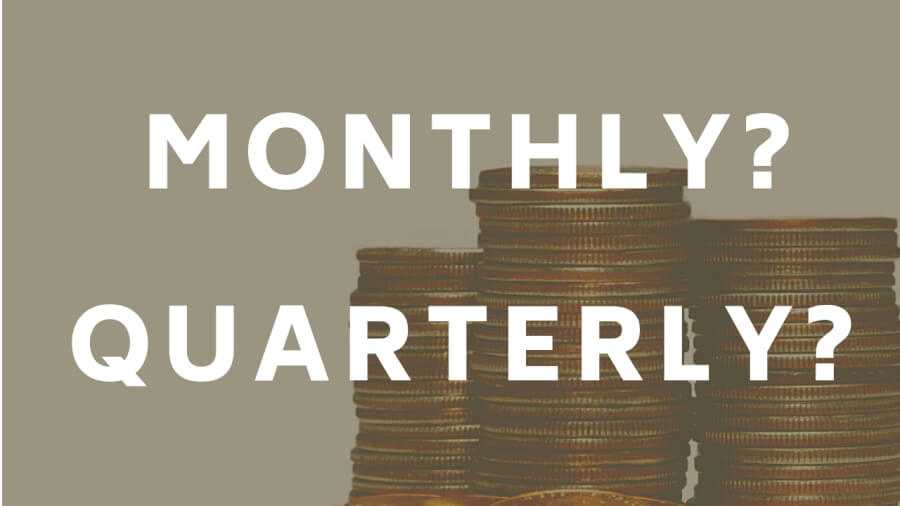 You can use quarterly dividend investments to achieve the same effect. It’s just a matter of “stacking” them so that they pay dividends in staggering months.

This approach could work. But, I see a couple of downfalls. For starters, it’s three times the effort in terms of research. Second, you’d potentially handcuff yourself by limiting your analysis to stocks that pay a dividend in a particular month.

If I was to try this approach, I would start here. This is the dividend calendar on the Nasdaq website. You can look for companies that have payment dates in the month (and even the time of the month) that you want. This can help you know where to start in terms of research.

Unfortunately, this calendar only goes out one month or so into the future. I imagine they don’t update it until the company/ETF actually specifies the ex-dividend date.

As far as mutual funds go, I couldn’t find a calendar like the one above. Most mutual funds I looked at either pay monthly, or pay quarterly in March, June, September, and December. Those who pay annually also typically pay in December. There are a lot of mutual funds to invest in. So, it’s plausible that you could pull off the “staggering quarterly dividends” strategy. But, if you do, it’s going to take some hunting on your part.

The Nasdaq Dividend Calendar does include ETFs. However, at a glance, I didn’t see any that paid in April or May. Indicating to me, that, like mutual funds, the quarterly payers tend to pay in the typical months of March, June, September, and December. Again, that’s not to say that a few don’t pay in the other months. But, in order to find them, you’ll have to dig a bit.

Months come and go more frequently than quarters. That we know.

If you’ve spent any time researching monthly dividends, then you’ve probably seen it written that “monthly dividends compound quicker than quarterly dividends.” The conventional wisdom says that if you are purchasing additional shares (via reinvestment), the fact that you are doing so monthly means that you will accumulate more shares because you are reinvesting sooner.

On the surface, this makes sense. The notion that a dollar today is worth more than a dollar tomorrow is the cornerstone of finance.

But, does this theory jive with the real world?

In the spirit of this website, I decided to build a model to test this cliché out. Like the rest of my models – it’s not completely comprehensive. I only tested out a few stocks to get an idea of the lay of the land.

I contained my analysis to stocks. Not tested were ETFs and mutual funds. When choosing stocks, I wanted to look at things from two different perspectives.

First, I chose three stocks that paid quarterly dividends and modeled what returns would be if they paid monthly. These quarterly dividend payers are among the so-called “Dividend Aristocrats” – stocks in the S&P 500 that have increased dividends for at least 25 years.

On the other hand, I selected three stocks that are monthly dividend payers to see how quarterly dividends affect returns.

Setup, assumptions, and potential shortcomings of the model

I went back in time five years. Yes, the results might have been different over 10, 20, 6, or 2 years. Some might say that five years is too short of a timeline. But, ultimately, I had to settle on something and five years felt like a reasonable amount of time for monthly dividends to do their thing.

On day one of the model, it is assumed that as many shares as possible were purchased with $5,000. The rest was just held in cash. I did not take commissions or taxes into consideration.

When dividends are reinvested, however, it is assumed that it is done through a DRIP (Dividend ReInvestment Plan). This means that fractional shares can be purchased. So, all of the dividend payments are turned into shares. None of them end up in cash.

I had to make an assumption about what day a theoretical monthly dividend would hit. Depending on the day, the dividend might purchase more or fewer shares and affect the outcome of the analysis. If the “assumed” day was on a Saturday, the payment date was moved to Friday. If it was a Sunday, it was moved to Monday.

Whew… a lot of things to consider for what should be a pretty simple and straightforward analysis!

What were the results?

Days Mo>Qt is the number of days, over the five year period (1,258 days) that the Monthly Total Value was greater than the Quarterly Total Value.

In this small sample, receiving dividends monthly did outperform quarterly. But, only by a marginal amount.

The biggest difference in return was for Solar Senior Capital Ltd. (SUNS). Which, theoretically returned an extra .54% total, due to the payment of monthly dividends. It’s something, I suppose. But, nothing really to write home about – especially over five years.

So, as I said, this is a small sample, and not indicative of the entire population of dividend-paying investments. But, after conducting this little experiment, I don’t feel that monthly dividend payers (as a whole) offer any sort of compounding advantage over quarterly dividend payers.

Of course, it depends on the investment. Like dollar-cost averaging – it’s great if the price keeps rising, not so great if it keeps falling.

Aside from an increased cash crunch put on the monthly dividend payer (which will be covered below), I can’t think of any disadvantages that differ from those for a quarterly payer.

One knock on dividends has always been that it implies a lack of attractive investment options for the company. The company can only expect marginal growth going forward and the only returns the investor can expect are via dividend payments.

The other side of that coin is – if a company does have good options for investing that cash, but instead chooses to pay a dividend, then the investor is worse off than they would be otherwise. By keeping the cash within the company and then putting it to work there, a higher return would be earned through an increased valuation.

I suppose it all comes down to the amount of faith you have in management’s ability to earn above-average returns on that cash. Some companies, from my experience, tend to operate about as efficiently as the government. Money is squandered on projects dreamt up by people whose sole skill is the ability to get promoted. In turn, new employees are hired unnecessarily. Everybody is put in a position to justify their own existence. So, they dream up new ways to spend money. The process repeats itself.

I think a parallel can be drawn between an investor’s dilemma about receiving dividends vs having the company reinvest in itself and a company receiving cash vs making a sale. Receiving cash is always the ultimate goal. Paper gains (and sales) are fine and good, but only in so much as they translate into cash flow.

Another (more legitimate, I think) knock on dividends is the role that taxes play.

First of all, ordinary dividends are taxed as income at relatively high rates. “Qualified dividends” are taxed at the more favorable capital gains rate.

What’s the difference between an ordinary and qualified dividend you ask? Great question! My research hasn’t turned up a straight answer. Most of the information I’ve found reads like this post on fool.com. In essence – you’ll find out what’s qualified (or not) when you get your 1099-DIV.

Anyhow, whether qualified or ordinary, after you pay taxes on the dividend, you’re going to have less to reinvest than the company is. For example, if a company is pondering paying a $1 dividend – they can alternatively invest that entire $1. You will, at most, be reinvesting $.85.

On, my sister site – SpreadsheetForBusiness.com, I write often about the importance of cash flow to a small business. Well, cash doesn’t become any less important when you’re a big, publicly-traded company. We all want returns on our investments, but not at the expense of the health of the investment.

Dividends should be, and probably are, part of a long-term plan by the board of directors. They shouldn’t be paid “on a whim.” But, once that cash is paid out, it’s not like the company can come back to its investors, hat in hand, and ask them to return it. It’s gone for good and cannot help the company if it were to run into a cash flow crunch.

Just as was the case with the reinvestment of cash back into the company – it comes down to your faith in management’s abilities. If you trust them to budget and plan appropriately, then a cash shortfall should never be a problem. If you don’t trust their abilities in this realm, then you should be leery of any sort of investment with them. Much less one that promises to pay monthly dividends.

What are some other advantages and disadvantages of monthly dividend investments that I overlooked?

What conclusions did you draw from the comparison of the effects of compounding?

Can you provide any examples of the difference between ordinary and qualified dividends?