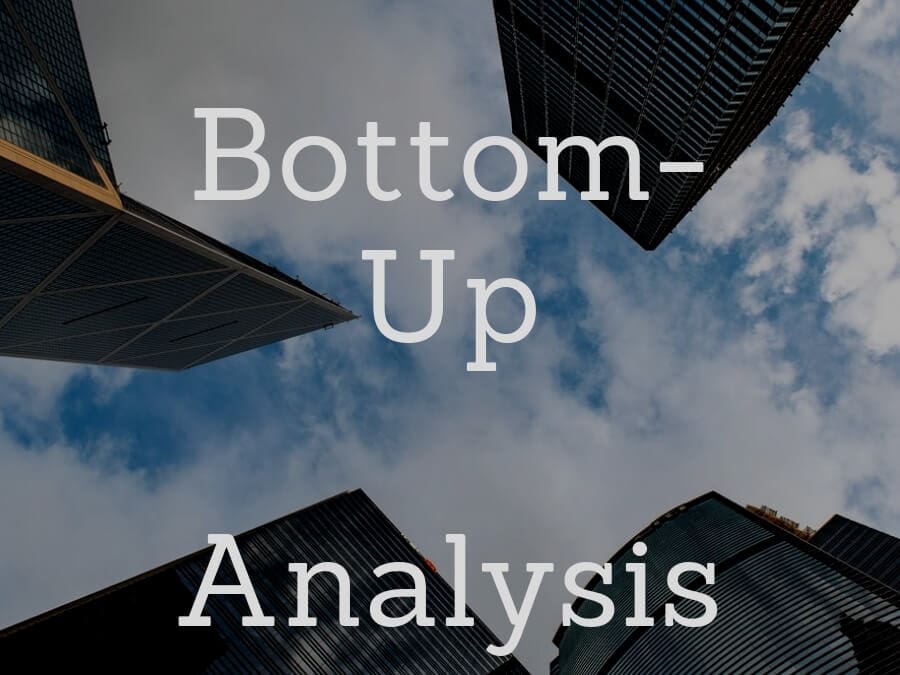 Bottom-up market sizing is one of two methods discussed in my post on product growth potential – market size and growth. The other method was a top-down approach.

As a rule-of-thumb, a bottom-up approach uses multiplication to find the serviceable available market (SAM). A top-down approach uses division.

These posts are part of an in-process series on Philip Fisher’s book on investing titled Common Stocks and Uncommon Profits. In this book, Fisher outlines fifteen points to consider when analyzing a company for potential investment.

Point 1 asks: “Does the company have products or services with sufficient market potential to make possible a sizable increase in sales for at least several years?”

Determining the potential size of a company’s market is one way to move closer to answering that question.

If you’ve never attempted this sort of analysis before, you might not have a clear idea of where to start. That’s why I put together these examples. Hopefully, they will help to get the gears turning.

This analysis has hints of a top-down analysis. Woofly started off with a population and narrowed it down. In this case, it wasn’t the population of people in New York City, it was the population of dogs. Of the estimated 600,000 dogs in NYC, they guessed that 8% of them were walked on any given day.

Once they had estimated the number of dogs walked each day, then they could employ a bottom-up analysis to estimate their company’s potential revenue.

Step one was to multiply out the total revenue available. I.e. if someone were to walk every single dog in the city at $20 apiece. This resulted in a revenue per day figure of $960,000.

After that, they employed another bit of top-down analysis. Knowing that it was impractical to expect that they would walk every single dog in the city, three times per week, every week – they scaled back their market penetration to 5%.

Finally, given the nature of their business model (which is, I assume, to connect dog walkers with dog owners), they factored in their commission. This brought their SAM to a more reasonable level of around $300,000 annually.

At the end of the day (I think) their assumptions were appropriately conservative and resulted in a practical estimate of the market size. What’s more, is they can use this same formula to estimate revenue for other cities besides NYC.

There isn’t much context for this example. But, fortunately, it’s pretty straightforward.

Again, if they kept good records, they knew that a 5% conversion rate for calls was about average. That means 240 sales per year. Or…one per day.

Granted, most of the information in this example was proprietary. But, if you were analyzing a similar type of company, you could make reasonable assumptions that would hopefully get you in the right neighborhood. You might overestimate on one variable but underestimate on another.

It would be nice to have perfect information to rely upon when doing a bottom-up or top-down market size analysis. Unfortunately, that probably won’t be the case most of the time.

It’s a simplistic, but very practical approach to determining the SAM. They start with the most simple piece of information possible – the price of one unit. In this case, the unit is a tomato and the price is $1.00. This information was easily from shopping the competition.

Next, they referred to a survey of local customers. Maybe they conducted this survey themselves. Or, it could have been something put together by a competitor, the local government, or a non-profit. Anyhow, the information was very valuable because it told them the potential volume of sales for their tomatoes.

The following step also required some research. This information told them that their advertising could reach 35,000 households per year in a given city. The number of households they could reach plus the average consumer’s tomato buying habits equals an estimate of revenue per city.

From there, it was a matter of multiplying out this information times the number of cities they wanted to operate in. That number was 30, and it brought total potential revenue up to $156 million.

If I were doing this analysis, I probably would have gone with something different besides the estimate of reachable households from advertising. The amount of money spent determines the effectiveness of the advertising. In my opinion. The ROI. Knowing what you planned to spend on advertising should then give you an idea of how many customers can be .

Of course, that depends on reliable information being available. If that weren’t the case, then approaching things from this standpoint might have been the prudent thing to do.

A top-down approach in addition to bottom-up market sizing

Since market sizing is such a subjective undertaking, it makes sense to approach it from a bottom-up, top-down, and any other sensible means you have at your disposal.

If you arrive at (more or less) the same conclusion from different analyses, you can probably have some confidence in your estimates.

What’s another good way, besides top-down and bottom-up to estimate market size?

What’s a company that is already successful, but hasn’t scratched the surface of its market potential?