Skip to content
Home » Who’s Got Rich Off Penny Stocks? Do You Have What it Takes? 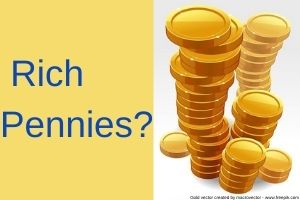 Most of the results from a search for “has anyone ever got rich off penny stocks” are instances where a particular company has gone from being a penny stock to significantly higher-priced stock.

It’s hard to find specific examples of people getting rich from investing in penny stocks. There are many anecdotal stories about people who took a given sum of money and earned a nice return in a short amount of time from penny stocks. But, finding cases where individuals had truly earned life-changing, long-term money is difficult.

The only consistent instance I can find is an individual named Tim Grittani. He (allegedly) took $1,500 and turned it into over $1 million. He claims to have done so under the guidance of penny stock guru Tim Sykes.

To be fair, I’m not trying to call anybody out here. I just want to be clear that I can’t verify whether Tim Grittani has made a million dollars investing in penny stocks. I also can’t say whether Tim Sykes’s products were responsible for his investing success (or anybody else’s). I leave that up to the reader.

Grittani, who is 24 years old and had just graduated from Marquette University, made $1,002,000 by trading penny stocks. He started with $1,500. Grittani followed the strategy that Tim Sykes teaches. Michael Goode also made $1 million from this strategy too.

My personal impression is that Tim is your average fintwit personality. Most of his posts seem to revolve around his niche. However, he doesn’t come off, to me, like a hype man.

I believe he has a product for sale. Which, makes sense. He should certainly capitalize on his notoriety. However, I don’t feel that he is a cringey salesman. At least, from what I’ve seen.

Keep in mind that the biggest indicator of someone’s authenticity is their willingness to be as forthright with their mistakes as with their successes.

To be fair, I only researched Tim Grittani a little bit. I didn’t examine every piece of publicly available information on him. I didn’t see any instances of him discussing his mistakes. However, that doesn’t mean that he doesn’t. It just means that I didn’t see them.

Anyhow, Tim Grittani seems to have a generally respectable reputation.

Just remember, whomever you choose as a mentor, be sure that they are authentic.

Others who have got rich off of penny stocks

Again, if a lot of people are getting rich off of penny stocks, most of them are keeping quiet about it.

Here’s a video on the Penny Stock Trader YouTube channel that highlights other traders who have got rich off penny stocks.

I’m not sure if this is one of Tim Sykes’s channels or if somebody copied his video over to their channel. Anyhow at the 1:38 mark, Tim addresses some of his clients (I believe) that have got rich off penny stocks.

The first he mentions is the poster child, Tim Grittani.

The next is named Michael Goode. Tim shows a screenshot of Michael Goode’s trading activity and it shows a profit of $1.78 million. By the way, Michael Goode is also on Twitter: https://twitter.com/goodetrades.

After that, Tim mentions a trader named Mark Croock who shows a profit of $637,000.

Then, Tim goes on to mention a couple more traders who might not be considered rich but appear to have made healthy gains from trading penny stocks. Alex, Jane, and Eric each have profited $185K, $174K, and $112K respectively.

Beyond that, I found a couple of mentions of the other people who have got rich off of penny stocks. But, each of those posts read like a thinly veiled scam. So, I didn’t include them.

Who’s lost all their money investing in penny stocks?

Many people have lost it all. Most remain anonymous. They tend to be novice investors who are willing to take big risks.

If getting rich off of penny stocks were easy, everyone would do it.

I’m guessing that a lot more people have lost all their money than have got rich off penny stocks.

Here are some examples I found of the former:

This Quora user lost over $80,000 investing in penny stocks. Unfortunately, Quora doesn’t give the OP much of an opportunity to expound on their question. So, it’s hard to pinpoint what went wrong.

Most of the advice the OP received revolved around learning more and making better decisions. Based on the little I read, this seems like the sort of advice Tim Sykes might have given too.

This is a well-researched post from 2018 that talks about the increasing popularity of penny stocks despite their poor (on average) returns.

One particularly interesting point, I thought, was that positive returns for penny stocks were driven by a few that were very successful. Most ended up losing investors’ money.

I don’t have any data to back it up, but I assume that 20% of the penny stock investors are experiencing 80% of the gains too.

This author suggested investing in options rather than penny stocks.

Just lost a lot of money from stocks/penny stocks. I feel sick to my stomach and don’t know what to do

The responses to OP generally encouraging. Most remind him that he’s still young, and has a lot to learn. But, also has a lot of time to make up for the losses. Furthermore, they remind him to not be emotional when trading.

How can you get rich off of penny stocks?

I don’t have the expertise to mentor you in penny stock trading (it’s trading, by the way, that seems to be the appropriate strategy for investing in penny stocks – not investing). I can give you some general pieces of advice, though. It’s free advice, so take it for what it’s worth.

The challenge, I think, is gauging when to get in and out of your penny stock positions. Trying to time the market isn’t just a challenge with penny stocks either. It’s difficult to know the top and bottom for any investment.

But, if you’re searching for people who have “got rich off of penny stocks” then I’m guessing you’re looking to roll the dice; so to speak.

The first piece of advice I’ll give if you’re looking to invest in penny stocks is to educate yourself. Beyond reading and watching videos, I would suggest that you create a paper trading account to start testing your theories.

Though trading with real money will come with a lot more emotions attached, I think it’s beneficial to get your dumbest ideas out of the way with a paper trading account. Repeated, small, failures are an important part of learning. So you might as well do some of your failing with fake money.

In my research for this post, I’ve seen several instances where Tim Sykes and Tim Grittani have both emphasized the importance of continuously learning. Tim Sykes, I know offers products and services for sale to educate wannabe penny stock millionaires. I’ll leave it to you to do your due diligence and decide if those products and services are right for you.

Here is a post by Tim Sykes that mentions a couple of recommended paper trading sites.

My second piece of advice is to be flexible. Flexibility is paramount if you’re going to truly educate yourself on trading penny stocks. You have to, in my opinion, be willing to throw out what you were sure was a winning strategy. Alternatively, you probably have to be willing to take it up the tailpipe for strategies that you know, ultimately, have a positive expected value.

Research what NOT to do

Another suggestion I’d give you is to research penny stocks scams. Know the signs of a “too good to be true opportunity.” Doing so should help you avoid the bulk of fraudulent penny stock trades.

Should beginners get involved with penny trading?

While temping, most new investors don’t have the unique qualifications needed for penny trading. It’s important for them to understand that their education will come at a price.

Penny stocks are attractive to novice investors because they feel they can buy more shares and that will translate into higher profits. After all, a $.50 increase in price is equal to a 17% gain on a $3.00 stock. It’s only a 1% gain on a $50.00 stock.

As far as I’m concerned, the stock market, as a whole, is often inefficient. This inefficiency is magnified for penny trading. Liquidity is low, bid-ask spreads are high, and the environment is ripe for scams.

Finding “normal” stocks that have extraordinary returns is hard enough. Picking winners when trading penny stocks is even harder. And, it seems to require a unique skill set that isn’t going to be intuitive to most investors.

The only way to learn is to try something. So, I’m not discouraging you from penny trading. Understand that you will make mistakes and go into it under the assumption that you will lose everything you risk. That way, you’re sure to exceed your expectations while climbing the steepest part of the learning curve.

Getting wealthy with penny stocks

Penny stocks are perilous. It is possible to get rich with them, but it is difficult. Before investing in penny stocks, learn as much about them as you can. And…don’t be a fool!

I’m sure that even the investment’s most staunch supporters would agree with that.

But, by learning as much as you can and not being foolish, you can, maybe, set yourself up to be one of the few who actually get rich with penny stocks. Hell, even if you come out the other end profitable, you’re probably in elite company.

As you’ve read – getting rich with penny stocks is rare. But, it is theoretically possible. So…get smart and good luck!