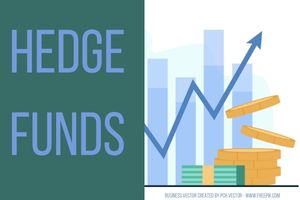 The term “hedge funds” is thrown around all the time.

Maybe you know all about them or maybe you have no idea what one is. More likely, you kinda know they’re like a mutual fund, but also different somehow.

You know what hedging is. But not hedge funds, per se. You can venture a guess. But, you don’t want to seem like a fool if the topic ever comes up in polite conversation. So, it’s better to just learn.

The media has given you the impression that hedge funds are all bad. And, you think that might be true in some cases. But, you also don’t trust the media, so who the hell knows?

Are hedge funds a ticket to risk-free high returns? Probably not? But, I mean, they must be doing something right? Right? People seem to get rich(er) by running and investing in them.

How can you get in on the hot hedge fund action? Is it even possible?

Why isn’t every fund a hedge fund? If they’re so great and all?

What are hedge funds?

A hedge fund is a type of investment fund that specializes in (generally) high-risk, high-return investments.

Hedge funds are private investment pools that have a single goal of maximizing returns by using leverage, short selling, and hedging. This is where the name “hedge fund” is derived from – their ability to utilize hedging strategies.

Hedge fund managers invest in the stock market, commodities markets, currency markets, credit markets, and other financial instruments. They can also take positions on events such as elections or lawsuits. Nothing legal is off-limits.

The variety of investment options is what distinguishes them from the plain vanilla mutual funds that you and I are used to. Mutual funds can only invest in stocks and bonds.

Is It Smart to Buy Individual Stocks? Or Mutual Funds & ETFs?

As alluded to, about anything goes when it comes to hedge funds. Each seems to have its own unique investment objectives. So, it’s difficult to classify them.

Here are some common objectives:

Who invests in hedge funds?

Those who invest in hedge funds need to meet certain qualifications.

Hedge fund investors are expected to be more sophisticated than average. Presumably, this sophistication better prepares them for the unique risks that hedge funds present. More on those below.

How can you learn more about hedge funds?

Hedge funds are big business. The biggest names in hedge funds control a lot of money. Many of these big names have been around for years and typically specialize in one type of investment strategy.

The business has become so enormous that its assets under management are no longer counted in billions; it now has around $9 trillion in assets on its books.

The business was formed as a risk management and fixed-income institutional asset management organization. Still, it expanded to become the world’s largest fund manager due to tremendous success in financial markets.

According to the company’s website, Bridgewater Associates, founded in 1975 by billionaire investor Ray Dalio, has grown into a formidable force, with over $140 billion in assets under management as of March 2021.

However, Dalio and his fund management business are not what most retail investors envision when they think of hedge funds, which have a rather lousy image among some members of the investing world.

The business may be only a few decades old, but it has expanded to epic proportions, with more than $143 billion in assets under management.

Renaissance Technologies, founded in 1982 by Howard L. Morgan and Jim Simons, is a large business that manages more than $130 billion in client funds. The company is based on Long Island, New York, and employs around 300 employees, with more than 150 of them doing investment advising services.

This British hedge fund has a combined trading experience of more than 230 years. It began in 1784 as the Royal Navy’s sole source of rum, subsequently expanding into the sugar, coffee, and cocoa trade sector.

What are the risks of hedge funds?

Hedge funds are considered risky because they can make big money or lose a lot. Oftentimes, the investments that hedge fund managers choose do very well or very poorly.

Since they invest in riskier assets, hedge funds are regarded as riskier than mutual funds. All other things being equal. The part that they played in the 2008 financial crisis exasperates this perception.

It’s only fair to note, however, that many hedge funds do seek to, and are successful in, reducing risk. Again, they are called “hedge funds” for a reason and that is because they often employ hedging strategies. By definition, hedging is a risk management strategy. Source.

Ultimately, I think, it comes down to the hedge fund manager. Like the managers of companies, the amount of risk shouldered depends on their judgment.

Does Senior Management Have the Right Qualifications?

Supposedly, many hedge fund managers keep a portion of their own wealth in the funds they manage. When this is the case, this offers investors a bit of risk hedging for investors. Because the manager has skin in the game – they have to suffer the consequences of risks that don’t pay off.

Another potential concern is the lack of liquidity. Due to the unique nature of some hedge fund strategies and the amount that can be earned from fees, many hedge funds place roadblocks on the withdrawal of funds. The extent of these roadblocks varies, of course.

Do hedge funds outperform other investments?

This is difficult to say. Certainly, hedge funds outperform many other types of investments. In fact, they might outperform mutual funds with similar strategies merely because of the hedging tactics they employ.

At the end of the day, a lot more depends on the manager’s luck and skill than on the fact that an investment can be classified as a “hedge fund.”

One remarkable test of hedge fund performance involves a bet between Warren Buffet and Ted Seides of Protégé Partners. Warren bet that an S&P index fund would beat the performance o a number of hedge funds between 2008 and 2017. Source.

As you can see, the S&P index fund performed considerably better over that time period:

How do hedge funds work?

Now you should have a little clearer idea of what a hedge fund is, how they work, and what the (hedging) risks are. Hedge funds are frequently in the news. Going forward, you’ll have a better grasp of the context and what the implications of the news story will be.

With a Master's in Project Management and an MBA in Finance, I am a seasoned professional with over 10 years of experience in Business Intelligence and Business Analysis.