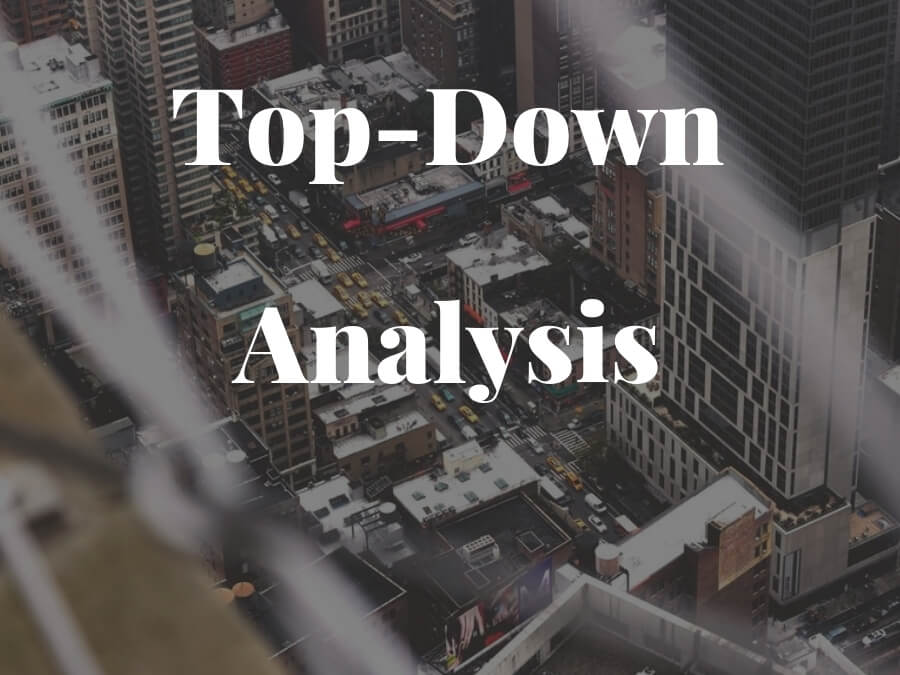 Analysts and investors use a top-down analysis to determine the size of the market for a business’s products or services. Doing so helps them to understand a company’s potential for revenue.

A top-down analysis starts with the biggest pool of potential customers. From there, it filters that pool down to reach a Serviceable Available Market (SAM). The SAM represents the practical cap on market size for a given set of products and services.

Here’s a summary of the examples provided in this post:

A top-down market analysis is one of the methods discussed in the post on product growth potential – market size and growth. The other method is a bottom-up approach.

Philip Fisher recommends investing in companies that have products or services with the potential to increase greatly in sales. In order to do that there has to be an available market.

Therefore, we use top-down and bottom-up analyses to quantify the available market

However, if you’re new to this sort of thing, it might be beneficial to refer to some examples as a point of reference. Below, are three examples that I found of top-down market sizing analyses. they can help you get an idea of where to start.

Streaming Korean television in the U.S.

Link to example
(unfortunately, this example has since been removed)

Students at MIT performed the following analysis. They saw an opportunity to create a service that offered Koreans living in U.S. access to Korean TV

The first thing they did was create a customer “avatar.” This avatar outlined the demographics and viewing habits of their target customers. With this information, they were able to dissect the population. They were able to determine the number of potential customers

First of all, they estimated the number of Koreans in the U.S. at 2.5 million. They knew their target customer was a 20 to 35-year-old female. So, they further broke that number down into 1.2 million individuals. All they needed to perform their analysis was simple demographic information. Things like ethnicity, age, and gender.

Next, they made an estimate of the current users of the bootleg websites. To do so, they used whatever industry data they could get their hands on.

example is unique. It combines the use of demographic information and industry data.

The use of a customer avatar was a great first step. By doing this, these MIT students knew which to apply to the population data

However, this example made no mention of the amount that they would charge for this service. That would play a big part in determining the number of people willing to pay.

This example focuses on a company called VigLink. VigLink started with and filtered down into a specific niche.

VigLink started with the entire e-commerce industry. That industry is enormous – 670 billion dollars per year. However, VigLink knew that they couldn’t sell every type of e-commerce service available. So, they had to narrow it down.

The first step was to focus on geography. They wanted to focus strictly on the United States The U.S. has an e-commerce industry of 334 billion dollars.

From there, they looked at different channels. Ways that a business might earn revenue from e-commerce advertising. They chose to focus on affiliate revenue. This narrowed the market down further to 67 billion dollars a year.

They knew that affiliate revenue was earned via commissions. Commissions are paid in one of two ways. Most are paid to merchants. A “mere” 5% (3.3 billion dollars) is paid in the form of fees. The portion paid in fees is what they wanted to focus on.

Finally, they narrowed down to the conversion channel that fit their business plan. That channel was network payouts – and it has an annual market of 1.2 billion dollars.

Using characteristics of their target businesses

Wow. 1.2 billion dollars is considerably less than $334 billion. But, it still represents an enormous opportunity. The next step is to attempt to determine how much of that market they can capture.

Once they’ve established themselves in this niche, other opportunities might arise. Remember this when thinking about the potential for sales growth.

The last example is a company that wants to get into the software industry. Specifically – marketing software. This is not a real company. It’s a hypothetical one used as an example.

Like VigLink, this analysis starts with the global industry size. The first step they take is to narrow that down based on geography. They know that the marketing software industry is 37 billion dollars on a global basis. Within the U.S. it is closer to $11 billion.

Marketing software is a broad term. It can encompass a lot of different types of software. This particular software company is only creating software for social media marketing though. The size of that market can is approximately 2 billion dollars.

They focused on the segment of the industry that they wanted to serve. In order to filter the market size down further.

In this example, their software is geared more towards the latter. Software for managing paid social media advertising encompasses half of the segment. Therefore, they are able to narrow their market down further to 1 billion dollars.

From here, they wanted to further filter the market. So that they could really understand what their product’s potential is. Companies that buy software for paid social media advertising fall into two general categories. These are large companies and small to midsize businesses.

The split between the two markets is roughly 50-50. They market this particular software to SMBs. So, they can narrow down their SAM to 500 million dollars.

Focusing on the appropriate segment

I like how this hypothetical company has a “typical customer” in mind. With these business demographics crystal clear, they’re able to know who they plan to serve. Maybe, more importantly, who they won’t (can’t) serve. Knowing this, they are able to remove companies from their SAM

Having that typical customer in mind will be beneficial for all marketing efforts. Not just the estimation of a potential market. In addition, it made this exercise incredibly simple and efficient.

Are there any other examples out there that you think are good?

How would you approach a top-down analysis for a company you’re interested in investing in?